skip to main | skip to sidebar

A small, short action involving a banner-drop and the display of the Tibetan flag will take place today on the walkway between MTR Central Station Exit A and Exchange Square in protest of China Gold International Resources (2099/ TSX: CGG), which started trading on the Hong Kong Stock Exchange (HKEX) earlier this week. The company is reported to have raised HK$2.4 billion ($309 million) in a recent IPO on the HKEX to expand and intensify its controversial mining operations in Tibet. Similar protests have been staged in Toronto and are planned in Vancouver, where the company is based. China Gold International Resources (formally Jinshan Inc.) has come under fire by Tibet advocacy groups for purchasing the Gyama (Chinese: Jiama) mine operation near Lhasa, Tibet’s capital, that is opposed by Tibetans in the region and abroad.

In 2009, Tibetans in Gyama protested water contamination and resettlement of nomads that had resulted from the mining operations. Tibetan rights groups are calling on Canadian mining companies and their investors to stay out of occupied Tibet or face escalated public pressure.

As the political situation inside Tibet continues to intensify due to increased concern and opposition to mining operations in Tibet, rights groups are calling on Hong Kong companies and their investors to steer clear of high risk business ventures in occupied Tibet or face increased public and political pressure.

we've had zoos for so long - hong kong has had ocean park all these years too. does it seem like our generation have particular respect for animals or any desire to protect the environment (in a way that's not only slogan-parrotting)?!!
Posted by 陳巧文 Christina Chan at 00:33 8 comments: 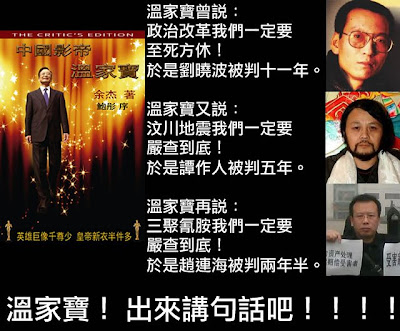 wise words from a friend:


(The quote about 公屋 is in the video not the article_
Posted by 陳巧文 Christina Chan at 14:36 2 comments: